Honey, will you enter the wife-carrying race with me? 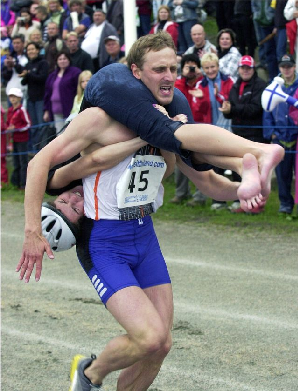 Honey, will you enter the wife-carrying race with me?

How weird are humans?  I just had to share this article about an actual wife-carrying race from the Finnish American Reporter. If you’ve read my earlier post on ancestry, you’ll know I am a died-in-the-wool Finlander at heart, but this little story left me speechless. I’ll have to ask my mom if our ancestors did this for fitness. Read on….

Sonkajarvi, Finland — Ville Parviainen and Sari Viljanen from Vantaa trounced the competition to take Finland’s 2015 wife-carrying world championship in Sonkajarvi, eastern Finland on Saturday. The result was the second consecutive win for Parviainen who competed with a different partner in 2014. Villa Parviainan and Sari Viljanen beat the competition’s demanding obstacle course in a time of just over one minute (1:02) to take the 2015 world championship.

Last year Parviainen teamed up with Janette Oksman to complete the race in a similar time — albeit one second slower — to win the championship. Parviainen has attributed his winning series to his participating in cross-training.

Previous winner Taisto Miettinen placed second with his partner Krista Haapalainen, while third place went to the Russians Sagal Dmitriy and Loginova Anastasia Moskova. Other winners in this year’s competition included the Estonian couple Janno Sild and Anu Viljandi, who won the senior’s category in a time of 1:31.Victors in the team event were Toni Hynynen, Mika Suomalainen, Joni Juntunen and Jaana Haavikko.

Here are the rules:

Reallllly? That’d be a much closer flight than Finland…..