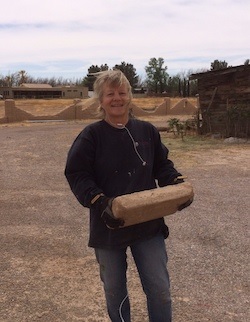 We’re living in the desert in New Mexico. Very brown here, but my yard was looking no worse than anyone else’s until some college students moved in behind us. Nice kids, really. That first Friday, they moved their living room furniture – two blue plaid sofas and bright green Lazy Boys – into the back yard, added a rusted burn barrel and a couple of cases of beer and the party was on.

Fast forward to Saturday noon. The back yard was still brown, but now we were unavoidably treated to a view four 20-somethings sleeping face down on dirt covered sofas, scattered beer bottles, and a smoking fire pit. The only one awake was their dog, who was quietly chewing his way through one of the Lazy Boys….

All of a sudden, the pile of unused adobe bricks I’d found in my back yard looked very intriguing. Why not build a fence? I pulled on my work gloves and picked one up. Kinda heavy, maybe 15-18 pounds a piece, but what a way to lift weights and gain some privacy. Strength training at its best. I began walking one adobe brick at a time over to extend the fence that was already there. Two bricks at a time were too heavy. 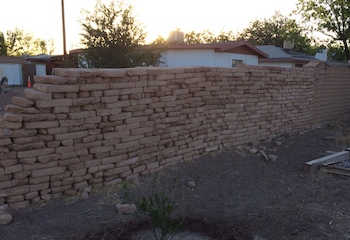 That first couple of days, I’d built the teeniest of brick walls – four bricks high and 20 bricks long. I’d work on it until my arms felt rubbery and then call it a day. But that was my workout – it combined strength building with cardio. My heart rate stayed elevated in the fat burning zone the entire time.

Funny how you don’t think of the total weight you lift when you hit the gym. But seeing the bricks pile up made me want to calculate my progress – 80 bricks x 15 pounds – that’s 1,200 pounds!

Eventually, over a week and a half, I’d moved 325 bricks over. That’s more than 4,680 pounds. Who knew? It’s amazing how much strength the human body has. I’m not anything special – just a regular middle aged woman. It just shows how you can be surprised by your own strength if you just push yourself to try something totally new.

True, several neighbors kept walking over to see if I wanted to use their wheelbarrow or dolly for hauling and when I declined, they looked at me like I was loco, but …

In the end? Biceps a little sore, abs a little sore, but I was definitely stronger by the time the wall was done.  And we gained a new wall that gives all of us privacy when we want it.