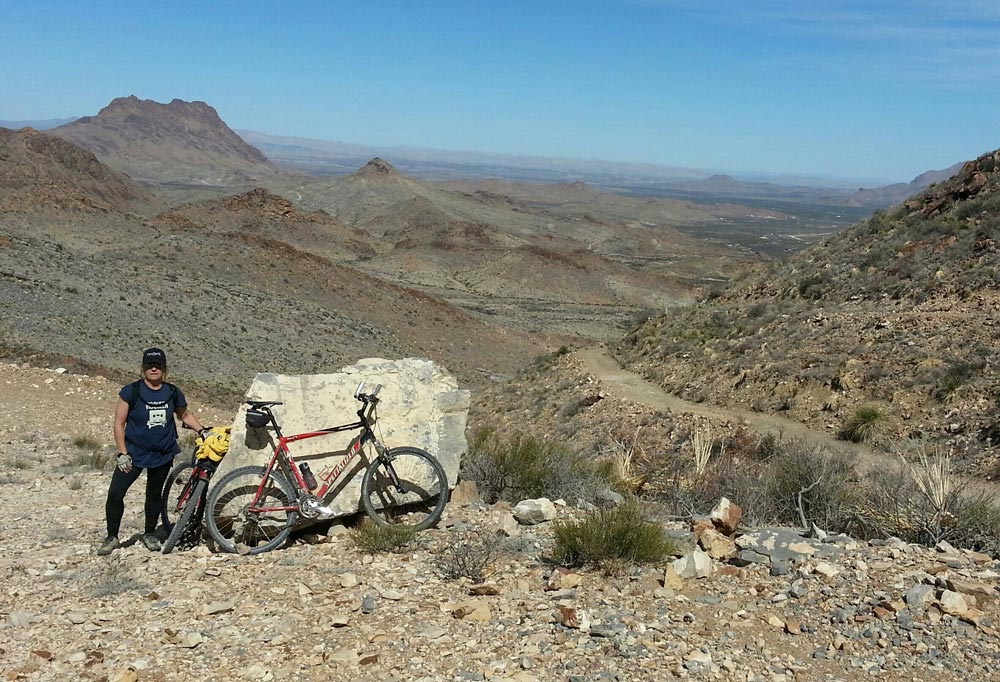 There’s More Than One Way to Ride a Bike

The good news is you can learn to ride your bike in new ways, no matter how old you are. That’s what I learned during one our first stays in West Texas after a life of living in snow country for the winter. I’ve been riding a bike since I was a little kid. I remember the first two-wheeler I rode and exactly where I wiped out, hit the sidewalk and sliced open my big toe as I tried to dodge the curb. I was seven years old. There was blood everywhere, but I got back on that bike – I didn’t want my brother showing me up.

I have always LOVED bike riding – it makes me feel like a giant 9-year-old kid. I never had a car until I was 25. I rode my bike to the university, to work, to hang out with friends – 30 or 40 miles a day and I loved it. I actually felt safer on a bike. If anything went wrong with it, I knew exactly how to fix it. In fact, I could tell if something was going to break long before it did. I knew how long it took me to ride 10, 20 or 30 miles and how much extra gear I could carry with no problem at all. I always felt like I had the world by the tail when I hopped on.

One thing about living in Minnesota is that it is one of the absolute best bike riding cities in the U.S. Many old railroad trails have been converted into bike trails that extend hundreds of miles throughout the state. We often rode 40 or 50 miles a day when we lived there. At the end of those rides, I’d be tired, but I also feel stronger and fit than ever.  So I was sure I was ready to take on the trails in Texas. 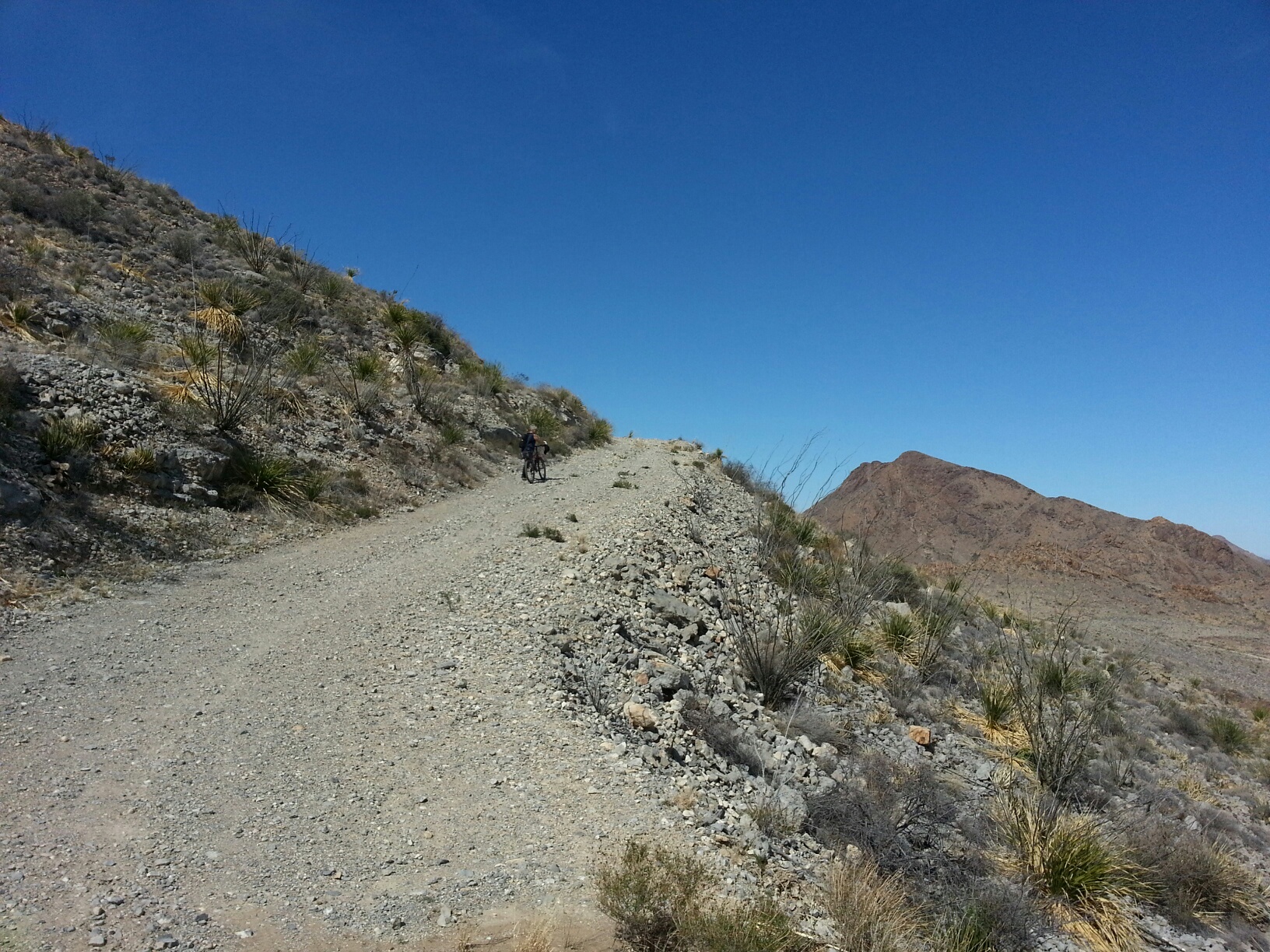 That spec near the left top is me pushing my bike up Christmas Mountain in Terlingua, TX.

I couldn’t have been more misguided in my instincts. Riding these desert roads has been a beautiful yet humbling experience.

Every pedal stroke has been different, from the first 100 yards from our front porch of our rented house. Riding out here means dealing with unfamiliar trails on mountain terrain that is often unpredictable.

We found mountain roads so steep and rocky that we had to push our bikes uphill for miles. The sides of the road were often so steep I’d keep my eyes locked onto the inside of trail hugging the rocks so that I wouldn’t see just how close the steep drop-off really was.

Here’s the other big surprise – you fall, whether you’re a beginner or an accomplished rider.

In the beginning,  I wiped out at least ten times in two months. TEN TIMES! Prior to that, I could barely remember that last time I fell off my bike and it was not because of terrain, but due to a mechanical glitch.

We ran into clay silt so fine that it turned into liquid concrete when wet and would completely lock up your wheels. One minute I was coasting down a hill and the next, I came to a screeching stop, nearly thrown head over my handlebars.

My friend calls this that “soul-sucking” sand…

On one day, when we were halfway through a 30-mile ride, we hit a road so deep in sand that I couldn’t pedal through it. I wasn’t in the right gear, and couldn’t keep the bike moving forward no matter how hard I tried.

I’d lose my balance as the bike bogged down in the sand and could feel myself falling as if in slow motion, with no way to stop. I hit my shoulder, I bent my bike seat, I banged my butt on rocks hiding in the sand. I was covered in dirt. I fell at least five times along the trail that day….

I thanked my lucky stars that I have the bones of a field ox. Nothing seriously hurt. Nothing was broken. I was surprised to find several deep cuts and deep bruising when we got back to the house. I didn’t feel anything the entire time we were riding – one of those situations where your brain keeps you oblivious to something you can’t do anything about.

You sort of learn when you’re a kid that you’ll never fall once you learn how to ride like the big kids. That’s a myth if you’re going to do any sort of exploratory riding beyond paved city paths.

The reality is that tough terrain always wins. Always. If you’re heading out to new country, give yourself time to figure out how to ride it. I shouldn’t have barreled down those desert roads at the same speed as I do in MN. I should have given myself time to experiment, to approach these trails in different ways. Maybe it wouldn’t have thrown me for such a loop when I wiped out. Kids don’t think twice about wiping out; as adults, we let it shake our confidence. 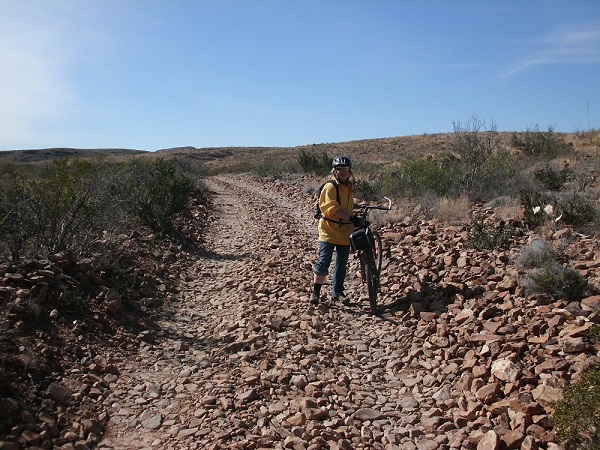 Eventually I got smarter. For instance, who says bike rides are meant to be entirely ridden? Is there a law about getting off the bike? I started walking my bike around particularly tough spots. I took more breaks. If we picked a trail that was too steep, we parked our bikes and hiked. I also decided to change my pedals back from clip-less pedals and shoes to those big old-fashioned flat pedals because I felt more confident with them.

And I decided it’s okay to fall. The best thing to do is approach it like a kid. If you feel yourself falling, don’t try to fight it. Let yourself go, relax into it. Then pick yourself up and get back on that bike, just like a 9-year-old would.