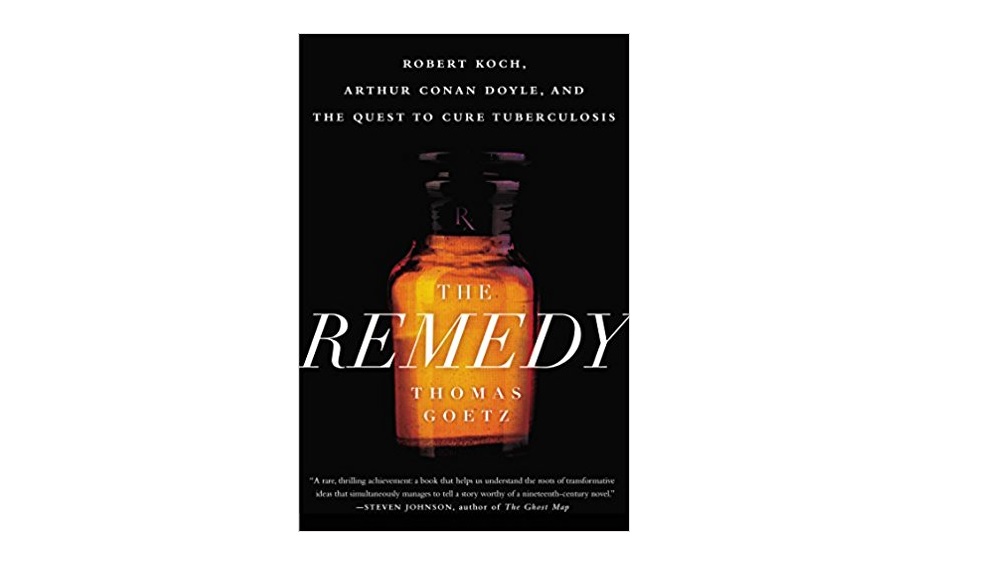 When I was a kid, I thought the phrase “Do Not Spit on Sidewalk” was an admonishment to practice good manners, especially in public. I didn’t realize the dark history that lay behind it until I read The Remedy: Robert Koch, Arthur Conan Doyle, and the Quest to Cure Tuberculosis

by Thomas Goetz. This book takes you back to the late 1800s, a time when there were no vaccinations to protect humanity from widespread infections that wiped out millions of people. Tuberculosis was one of the worst killers.

Until I picked up this book, I thought of tuberculosis as a remote disease covered by those inoculations we received as kids. I never for one minute thought I would could sick from it or what that would mean. I didn’t learn of the brutality of tuberculosis and the barbaric practices followed to treat it until I heard my friend’s late mother’s story a few years ago. I am, after all, a very late baby boomer who has never known the world without the safety of vaccinations.

Goetz’s book blew my misconceptions about the obscurity of tuberculosis out of the water. He notes, “In the last half of the 19th century, almost 25% of all deaths were due to tuberculosis. At the time, it was the leading cause of death in the United States, and in German towns, it was the second largest cause of death behind gastrointestinal diseases.” By the end of the 19th century, about 40% of working-class deaths in cities were from tuberculosis.² With such high mortality rates, no family escaped the ravages of the disease. As Goetz comments, it was so rampant that it was almost an everyday fact of life.

In the 1880s, German medical doctor began Robert Koch set a goal for himself to isolate the cause of tuberculosis. At this time, little was known about it. Many people believed it to be hereditary. Indeed, the concept of disease spread by germs was rare among medical doctors, many of whom still believed

in bloodletting as a prevention or cure of illness.

Koch, who had gained recognition for his earlier work in discovering the causes of anthrax and cholera, was convinced that tuberculosis was infectious, not hereditary. Using his own carefully defined set of laboratory procedures, he announced in 1882 that he had isolated the bacteria that caused the spread of tuberculosis, attracting the attention of scientists and sufferers worldwide. In 1890, Koch announced that he had a remedy, tuberculin, and this set off a frenzy for the cure.

Near-pandemonium ensued. Koch was flooded with thousands of letters beseeching him for treatment. People flocked to his clinic for treatment, jamming street cars and practically overrunning the town. This section of the book is vivid in its description of the horrifying progression of the disease and the nearly hysterical search for a cure. Desperate people sold their homes and all their belongings to pay for a daughter or son’s care at a sanatorium. They were also willing to try just about any noxious remedy in hopes of recovery. Even the description of the ingredients in promised cures and hoaxes that abounded is telling in the lengths people would go to be cured.

Koch’s quest for a r

emedy, however, proved to be nearly his downfall. Pressured by his government, the medical field and his own ego, he made a too hasty introduction of his medicine, which was flawed. When time showed that the treatment did not, in fact, cure tuberculosis, Koch’s scientific star had fallen. His reputation in tatters, he left the discovery of an actual remedy to other scientists. While the disease continued to command the attention of leading scien
tists, the cure for tuberculosis was not found until antibiotics were discovered in the 1940s.

Meanwhile, the world continued to learn about the transmission of the disease. That phrase about not spitting on the sidewalks? It came about as a health precaution after scientists discovered that diseases such as tuberculosis

spread through droplets of moisture passed from person to person. Spitting was a common habit of the day. People routinely spit on sidewalks, on floors, in crowded streetcars, you name it, a perfect practice for spreading disease. Recognizing the risk, the elimination of spitting became an urgent public health measure backed up by the risk of fines and imprisonment.

Goetz conveys the fear, excitement and wonder of this golden age of scientific discovery. He shows the reader, in graphic detail, what the world looked like without all the scientific advances that we now take for granted. He also makes the story more memorable by intertwining the personal and political forces shaping the world of medicine in this era.

After reading The Remedy, I’m more thankful than ever for the work done by scientists like Koch, Louis Pasteur and others in the name of public health. Vaccinations are a controversial topic to be sure, but this book certainly opened my eyes to what the world would be like without them. I wouldn’t want to live there.