Living in a Glass House 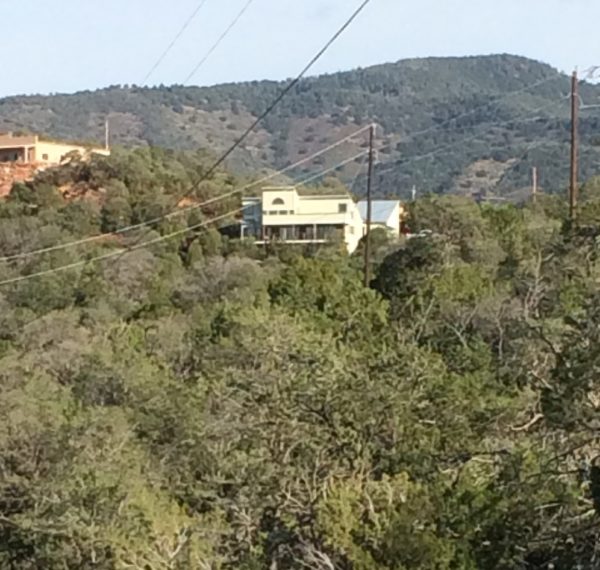 Living in a Glass House

We were in search of full-blown rugged living when we moved from a city to an old logging town high up in the Sacramento Mountains at the edge of the Lincoln National Forest. We were surrounded by miles of pinyon and juniper forest in mountains that look down over White Sands National Park.

This area has some the best terrain for hiking I’ve ever seen. I spend most of my outdoor time hiking on dirt roads and old railroad trails, rarely seeing anyone except the occasional coyote. People tell me there are mountain lions and bob cats out here, along with desert rattlesnakes, but I have yet to see any. 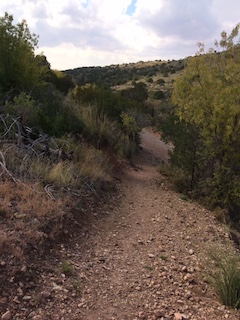 One loop takes me two miles into our little town of 300 people. I usually hit the local post office, buy a snack at the convenience store, say hi to the owner and head back up the mountain. The road into town is narrow and windy, and the locals who are not accustomed to seeing hikers on their road, so I started wearing a bright yellow windbreaker stick out like a beacon. They all drive pretty fast, busy with their own routines. Most wave, but that’s about it.

One day, I stopped at the convenience store for a coffee break. I set aside my hiking poles and Camelback and walked up to the counter where Cecil, the store owner, sat making earrings out of peacock feathers. Another customer was leaning on the counter drinking a coffee and chatting with Cecil. He was dressed in a worn gray flannel shirt and suspenders, all covered in sawdust and brown work boots hacked by long use. His long silver pony tail stuck out in renegade curls under his trucker’s hat.

As I walked up, all conversation between he and Cecil stopped. He looked straight at me and said, “I’ve seen you walking all over. Where are you from?”

“What?” I said, surprised he was talking to me. “We just moved here from Las Cruces.”

“Where do you live?”

I paused, not exactly wanting to give my address to a stranger. “Oh, up on Gray Rock Road.”

He shook his head, pushed his glasses up on his face and said somewhat impatiently, “I know that, but exactly where on Gray Rock Road?” he asked.

He eyeballed me again, apparently expecting me to cough up more details, so I gave in. “You know Angela? We’re renting her house.”

The view from our deck.

I looked over at the Cecil. She nodded in agreement. I paused, not sure what to say. It is practically a glass house, after all. One entire side is made up of three levels of sliding glass doors and balconies with sweeping views of the mountain range.

“I love it there,” I said, “It’s like living in a giant painting of the mountains. Beautiful!” I said. He and the store manager nodded at each other as if to confirm I was a little bit wingy.

“Whatever. I remember when she was building that house; she picked the wrong place,” he said. “She should have faced those windows  90 degrees the other way, to the east.” He paused to slurp his coffee. “You’re in for a cold, cold winter up there.”

“But this is the first time I’ve ever met you,” I said.

“That don’t matter. I see your boot prints all over and I’ve seen your husband around on his bike. You should know me by now!” he said. “I live right off the side of your road, in the round adobe.” Then he chuckled, and I caught a twinkle in his eye as he took another slurp of his coffee.

We stood there, drinking our coffee. “Now Santiago’s place just behind you – that’s the house you want,” Marty said. “He built it into the side of the mountain just like yours, but he’s got it figured out. It’s facing just right, built for comfort.”

“Have you been inside it?” I asked.

“Yeah, I helped dig that lower level.” he said. “It stays at an even 70 degrees in there all year round.”

“Did you work on the house we’re living in too?”

“Nope, she didn’t ask me for help, but I watched the whole thing,” he stated. “Don’t know why she had to put it right there, but that’s what she wanted. Now she has a cold, cold house.”

We finished our coffee, and I headed back out the door. Who knew? Wonder what else the neighbors already know about us….

A week later, I took a different route, down a skinny dirt road into the canyon. The views were drenched in an apricot sun. As I walked, I noticed someone watching me from their garage. Not hostile, just curious. I waved and kept walking. As I got closer, I could see him moving his chores out to the edge of his driveway, as if to let me know he wanted to talk.

“Sure is,” he said. “Unbeatable weather all year round.” We introduced ourselves. Pat, my new neighbor, was a retired professor of few words but a friendly enough manner. We chatted for a few more minutes and then I asked, “Is it okay if I walk on these roads?” I noticed that he paused a beat.

“Yes, just up there on Gray Rock.”

“Oh.” he paused at his wood chopper and squinted up the slope into the sun. “In that green house that hangs right at the edge of the mountain up there?”

I turned and pointed. “Yes, you can see it from here. Great views, huh?”

He paused as if he wanted to say something but didn’t know how. “Er, are you sure you’re going to be warm enough in that house?”